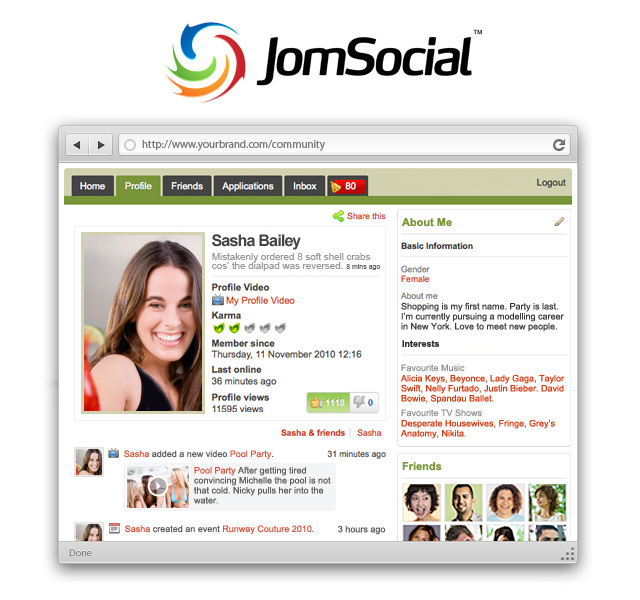 Before PeepSo, there was JomSocial.

Before PeepSo, there was JomSocial; a Joomla plugin that would allow you to create your own private social network on any Joomla-based website. In the years since the plugin first hit the market, it’s been used in all kinds of ways, for all kinds of purposes. There are communities for Shakespeare aficionados, and people suffering from anxiety; it’s been used to create support networks for refugees, and manage web design clients. There are communities of less than a hundred, and communities of up to ten thousand; it all depends on how close-knit people want their communities to be, or how niche their market is.

Almost 70% of respondents reported seeing an increase in user engagement with their website as a direct result of using JomSocial.

We recently surveyed JomSocial customers to see how their communities were going; the results were overwhelmingly positive. Almost 70% of respondents reported seeing an increase in user engagement with their website as a direct result of using JomSocial; over 30% reported a significant increase in traffic to their site since using the plugin. Ten people who were using JomSocial for their business website reported a marked increase in revenue as a direct result of having a private social network.

The user experience seems to be overwhelmingly positive too: we asked our users to give us feedback and tell us what we could do better, and nearly everyone said that we should just keep up the great work. The rest were just minor suggestions for things they thought would be cool…we’re all about cool, so we’re taking those into account as we continue to work on and have fun with the product. About half of the people we surveyed work in tech, so having a stamp of approval from people who really know their code is a fantastic feather in our cap.

These same benefits are now available to WordPress users via PeepSo; you’re likely to see more engagement, an increase in traffic, and if you’re using PeepSo for your business, an increase in revenue as a direct result of using the plugin. Although a significant portion of the people using JomSocial were tech people, you don’t have to be one to use PeepSo; it works straight out of the box, no coding knowledge required.

To find out more about PeepSo and how it works, check out our community for a live demo.

Tell us a little bit about your private social network.

Anxiety Social Net is a social network for people struggling with mental health issues. The site has been live for over 4 years, since the very beginning of JomSocial. AnxietySocialNet has many features and customizations that don’t come with the default version of JomSocial; we have a Q&A system, personal diaries for each user and live chat among other things.  The community has been featured in many publications including ADAA (Anxiety and Depression Association of America) and PSFK . Today we have over 10.000 users and new members are signing up every day.  People on the site are very supportive of each other and many users have reported that simply being in a “safe place” where they can share their experiences with others who can relate has helped them understand they are not alone in their struggles and in turn reduced their anxiety.

Why did you decide to start a private social network, rather than setting up a Facebook group or a forum?

From the start it was clear to me that I wanted to create an independent resource where people could come and share their innermost feelings. I think Facebook is a great tool for sharing in the good times but people refrain from showing weakness in front of their close family and friends due to a fear of being judged. The other problem is that groups and pages on Facebook are subject to (Facebook’s) own guidelines and I didn’t want to be limited by that. The last thing that really bothered me was that I wanted to create a specific type of environment and that is not possible with the current functionality of Facebook groups and pages.

What have been the biggest challenges so far?

I knew from the beginning that I wanted to create a social network. The problem was that the technology was not quite there yet (didn’t match up to the vision). Back then, when another team was in charge of JomSocial, I ended up spending thousands of dollars in customization just to make it user friendly and function the way I wanted.  At the end of that process I ended up with an hybrid monster of sorts that was really hard to maintain and impossible to upgrade. I pretty much gave up on JomSocial until Merav and the iJoomla Team (the people who created PeepSo) took over and made JomSocial what it is today. Around six months ago when I saw what the new version of JomSocial had to offer, I finally accepted that I would have to let go of my little monster to take advantage of the new, advanced direction the technology was taking. I then started a fundraising campaign to pay for the upgrade of the community to JomSocial 4. Our members ended up funding 70% of the costs, I chipped in with the rest and made it happen. I can say that today I am very happy with the results and the site is finally upgradable and pretty much in my hands without the constant need for developers I used to have.  Also, since the upgrade we are getting more users and engagement has grown considerably. It’s been a bumpy ride but I am very happy I invested time and resources in this project as it has a positive influence in people’s lives.

What advice would you give to someone thinking about starting their own private social network?

I would say, If you really want to create a community just go for it, It has never been easier than today (especially with plugins like JomSocial and PeepSo). I would recommend that you start a community on a topic you are really passionate about, as it can be hard to kick start it and you need to put a lot of time and energy to make it really happen. Lastly, you have to be perseverant as they may be a lot of bumps along the road but if you keep at it you will find things get better and it’s really worth it.