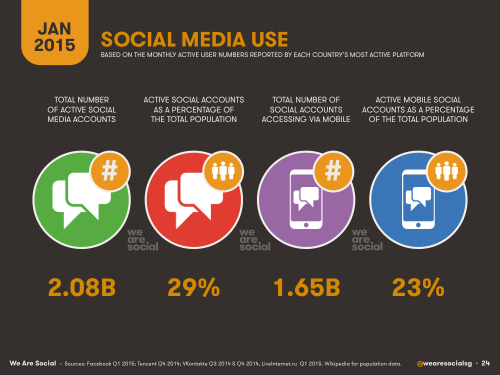 At a glance, it might look like Facebook is your only option if you want to effectively incorporate social networking into your business’ online marketing strategy; but that’s simply not true. Here’s some facts and figures you should know about social media in 2015, and which might help show you just how relevant and profitable a niche, privately hosted social network could be.

1. Three out of the five top social apps are instant messaging services; people are craving a more intimate and direct social networking experience. They want to emulate the connections that they have offline, and have genuine conversations. Big social networks, like big parties, are fun once in a while; but they aren’t where most of your long-term, profitable connections will be made.

2. Social networks will earn 8.3 billion dollars in advertising revenue this year. Niche social networks like Gamurs, a social network solely devoted to gaming, will be getting a piece of that pie – so why shouldn’t you? It might be smaller than Facebook’s piece, but that doesn’t mean it won’t be significant or valuable.

3. Mobile phones account for 38% of all online activity; if someone wants to ask you a question while they’re on the go, having chat or social networking capabilities on your website makes this process much more user-friendly and efficient (they can just log in, type and hit send, rather than having to find and enter your email address).

4. Facebook Messenger has 500 million users, but China’s Qzone has 639 million. Just because people belong to Facebook, doesn’t mean they want it to be their primary form of communication – especially if they’re from another country, or belong to a niche interest group.

And that’s just the tip of the iceberg – social networking is incredibly complex and has more opportunities for new brands and platforms than you realize. You just have to be willing to step out and give it a try – and PeepSo is the perfect place to start and create your own private social network.