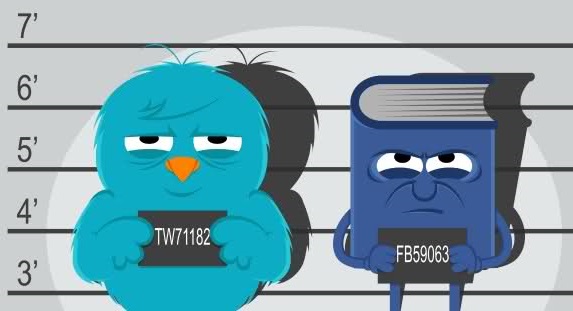 It’s not just people living under oppressive governments who get arrested and imprisoned for what they post on social media. Even your “friends only” content can end up getting you in trouble; your contacts might report your post to the authorities, and Facebook will get in touch with police if they believe someone poses an immediate threat to themselves or others, or if someone has uploaded criminal content.

It’s pretty clear that in most cases, people simply don’t understand the implications of posting to a site with millions (or even billions) of members; that when you post something to Facebook, you’re writing with permanent marker (if you have a teenager, it might be worth creating a private social network for family and friends until they’re aware of and prepared to deal with the consequences of what they say).

Here’s some examples of people who were jailed or fined for what they put up on social media; sometimes jokingly, sometimes not.

Paul Chambers wasn’t very happy about his flight being delayed due to snowfall; he tweeted that the airport (mentioning it by name) had “a week and a bit to get your shit together, otherwise I’m blowing the airport sky high!!” A week later, he was arrested under the Terrorism Act and detained for seven hours.

In another case involving British travelers, two young British tourists were  detained on arrival at Los Angeles airport (LAX) after one of them tweeted that he was going to “go and destroy America.” Even though “destroy” is just British slang for “party”, the man and his traveling buddy spent the night in separate cells, and were put on a plane back home.

Maxwell Marion Morton was charged with first degree murder after posting a photo of himself and his victim to Snapchat (one of his friends took a screenshot of his perhaps unintentional confession, with his username in full display).

A teen mom in Florida was arrested after posting a photo of her then-11 month old son seemingly smoking a bong on Facebook. The authorities decided that the photo was staged and the child had definitely not ingested any drugs, but the mother was still fined for owning the bong and forced to undergo an assessment of her parenting ability.

Maxi Sopo fled Seattle for Cancun after he was charged with bank fraud. He bragged about it to all his friends on Facebook, including a former justice department official. He was arrested and sent back to the United States.

Jacob Cox-Brown posted “Drivin drunk… classic 😉 but to whoever’s vehicle i hit i am sorry. :p.” on his personal Facebook page. One of his friends reported the post to police, who matched his car to an unresolved hit and run case and he was prosecuted.

Mark Byron was going through a custody battle with his wife, after she claimed (and he disputed) that he’d committed an act of domestic violence. He posted “… if you are an evil, vindictive woman who wants to ruin your husband’s life and take your son’s father away from him completely — all you need to do is say that you’re scared of your husband or domestic partner…” on Facebook, and a judge ordered him to post an apology to his wife on Facebook (to be left up for thirty days) or he’d end up spending two months in prison.

David Voelkert was friended by a stranger called Jessica Studebaker on Facebook – or rather, someone pretending to be a stranger called Jessica Studebaker. He knew that it was really his ex-wife Angela, who had created the profile to try and get information she could use against him in their custody battle. He told her, via the fake profile, that he’d planted a GPS in Angela’s car and was planning to kill her. Angela took the information to the police and David was arrested; he was released immediately when he produced a notarised affidavit stating the following:

“I am lying to this person to gain positive proof that it is indeed my ex-wife trying to again tamper in my life. In no way do I have plans to leave with my children or do any harm to Angela Dawn Voelkert or anyone else.”

Dakkari McAnuff posted “100 RT’s (Re-Tweets) and i’ll shoot someone walking,” on Twitter in March 2014. After that, he posted a photo of a rifle pointed at a Los Angeles street, someone lying dead, and himself (apparently) in a police car. Police used the posts to track down his location, raided his home, and charged him with making criminal threats (costing him a hefty 50,000 dollars in bail money). He and his friends claimed it was a prank that got out of hand.

A 14 year old Dutch teen sent a tweet to American Airlines (under the username Queen Demetriax_), saying “Hello my name’s Ibrahim and I’m from Afghanistan. I’m part of Al Qaida and on June 1st I’m going to do something really big bye.” Although intended as a joke, American Airlines responded with “Sarah, we take these threats very seriously. Your IP address and details will be forwarded to security and the FBI.” She pleaded with them not to tell her parents or take action, but eventually had to turn herself into police where she was charged with posting a false or alarming announcement.