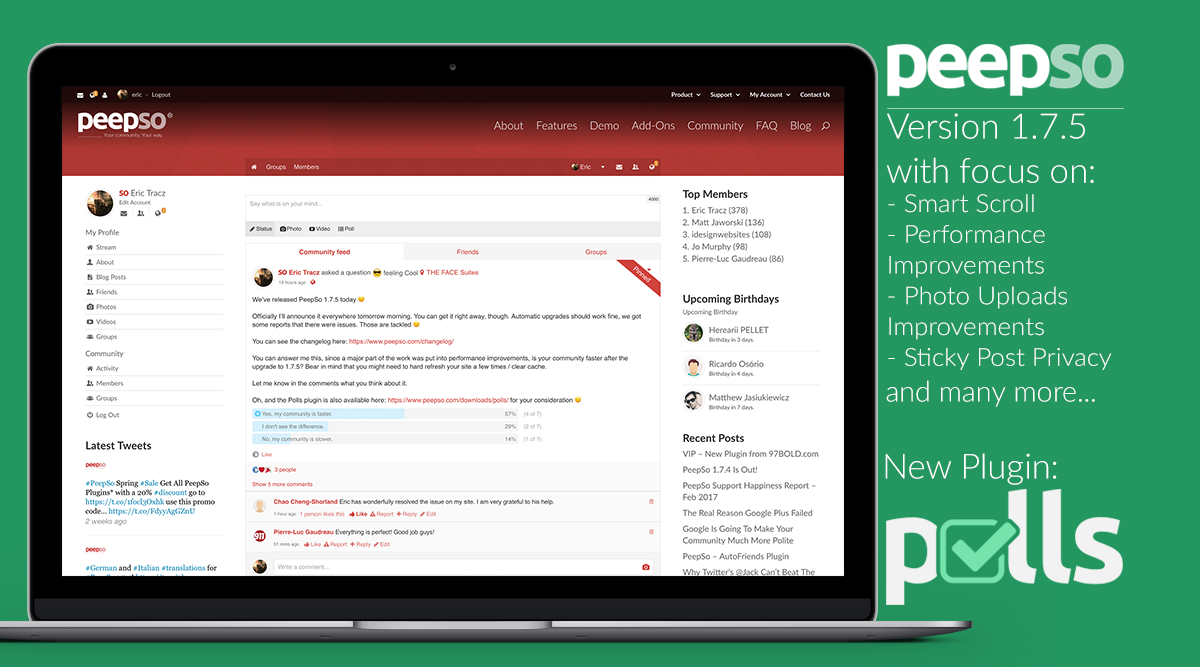 PeepSo 1.7.5 is finally out! That’s great for you as you get the latest update and with it all the improvements, bugfixes and of course new features, those are all better tools allowing you to make your community as successful as it can be! Please pay attention to the last two paragraphs containing upgrade information and dealing with caching.

The Polls plugin is a new addition to the PeepSo plugins suite that allows you and your community to create polls. The polls can be placed in the main activity stream, in users’ profiles and even in groups. When creating a poll users can set either a:

Users can cast their votes once per poll. The design is sleek and simple, and because it’s fully responsive, it looks great on mobile as well as on desktops. Logged out users see the polls on posts, but can’t vote or see the poll results. They are prompted to login to vote and see results.

Add Polls To Your Community!

PeepSo 1.7.5 also brings a great deal of performance improvements. Look out for these awesome changes:

Say goodbye to pagination everywhere! This is a performance and UX game changer. Because there are no pagination settings in PeepSo, items don’t load in batches of 10 or 20 or anything else. Instead, PeepSo 1.7.5 loads all the items above the fold — the space that you can see on the screen — and a few items just below the fold just so that when you scroll down some items are already loaded. As the user continues to scroll, more items are added seamlessly and quicker than ever before.

So now we only load what’s needed and we ignore the items the user isn’t going to see. We don’t waste your server’s resources.

And as we load items to fill in the view (in batches in some cases), big resolution screens won’t load with a pagination level that’s too low for the screen.

We’ve applied the new scroll to:

…and pretty much everywhere else we could think of.

Uploading photos through Postbox is a complex process. For each uploaded photo we’ve needed to generate multiple thumbnails for use in different places across the community. On slower servers, photo uploads could crawl especially when you tried to upload 20 photos in one batch.

We’ve speeded things up. Now we don’t upload all the photos at the same time. Instead, we queue them to help slower servers cope with the load. We also only generate one thumbnail, which we return to the Postbox for previews. The other thumbnails are generated when the photos are previewed on the stream. The speed and efficiency of handling photo uploads is immeasurably better compared to previous versions.

Some of our clients have pointed out that they’d like to be able to show lists of members to guest visitors. But we also know that other clients would prefer to keep their membership lists private.

To satisfy the both sides we’ve added a new setting for PeepSo that makes member lists public. By default, the option is switched off. To turn it on go to: PeepSo Config > Appearance > Members listing Switch “Allow guest access to members listing” to “Yes.”

WordPress has had an ongoing issue with auto-rotating photo uploads. On some devices the photos looked great; on others they rotated 90 or 180 degrees. It took a bit of thinking but we’ve managed to get it fixed.

Random Filenames For Avatars And Covers

Some very high cached servers have had some caching problems and our solution of adding a random string to avatar and cover filenames hasn’t worked for at least one setup. We’re now randomizing the filename completely so instead “avatar.jpg?2h2s92y4is824hw”, you’ll get something like: “2h2s92y4is824hw-avatar.jpg”. It makes all the difference.

Make sure your CDN/cache plugin/provider is properly configured to handle resources linked with query strings. Otherwise JavaScript and CSS resources will not be properly reloaded after the upgrade. You can read about it in the documentation of your CDN/cache provider. See the following docs:

For this release please upgrade PeepSo Core as first one and then all child plugins like MsgSo, GroupSo etc. You can see the full changelog here. If you’d like to see what’s coming up next, check out our roadmap here.