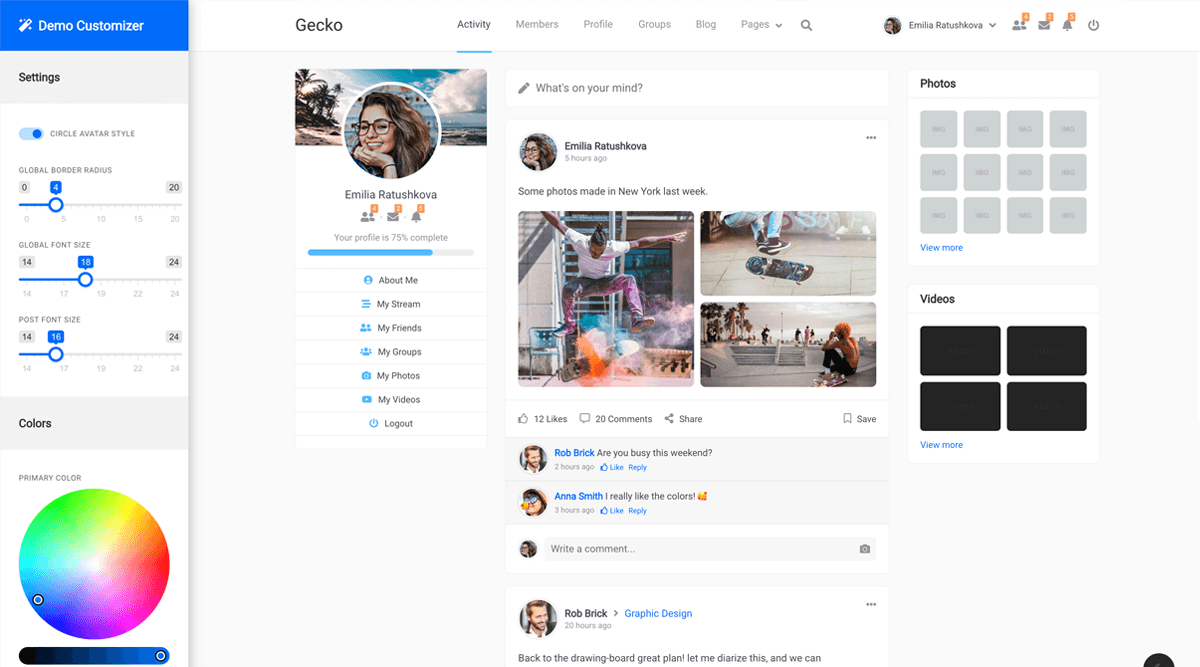 About a month ago I posted a couple of preview screenshots showing what’s coming to PeepSo and Gecko theme this year. It’s time to show you a bit more now.

The video embeded below is a sneak preview of a customizer that is in the works. It’s still a pre-alpha stage. There are just a couple of options as a proof of concept but it does show what the customizer is capable of. Let’s go back to the beginning, though.

Before Gecko was ever even in the planning stages, PeepSo was trying as much as it could to inherit styles from the theme that was being used on a given website. We did create a couple of preset colors like: light, dark, green, blue, red etc. You could quite easily switch between them by going to the backend > PeepSo > Configuration > Appearance. And it was all fine… more tweaks could always be done with custom css and template overrides. That’s not really something that’s easy for everyone.

When you’re relying on third party themes, there’s only so much you’re actually able to do. Each theme is different, created by different developers and we have no control over it whatsoever. None. So, in order for PeepSo to work best with a majority of themes there needed to be some compromises. Especially in the realm of general aesthetics. We got tired of all the compromises. I tasked our Frontend Wizard with creating some mockups / previews of what PeepSo could look like and that’s how Gecko Theme was born.

After publishing those previews on our community… there’s no easy way to say this so let me just say:

We did not expect such enthusiasm. We were practically forced to release Gecko as soon as we could. Based on popular demand and many not really carrying whether it was already stable, we released it as a beta. We gathered a lot of feedback. We improved it greatly. We not only have great PeepSo support within the theme, but also do our best to add support for other plugins like WooCommerce etc.

We learnt a lot when we were developing Gecko. We really did. One of the main things was to make sure it’s easy to use and customize. The, let’s call it, WordPress-Theme-Customizer is all great but does have its limitations. Based on that an idea was born to create a customizer that’d make it all very easy. Something that could be used quickly and effectively. Something for everyone.

Please do remember that it’s still a DEVELOPMENT PREVIEW. It’s not final and is subject to changes and improvements. It also shows just a couple of options. There will be more.

The customizer will come with out of the box support for the entire site (duh!) and PeepSo. With time we’ll be adding support for other major plugins. It also marks a big milestone in the theme’s development and marks a nice direction for the future.

The design and direction are about 2 weeks away from being done. Beginning of February our team will start to ‘wire’ the new design, customizer etc. The general estimate is about 2 – 3 sprints to get that done and released. Should all go according to plan.

If you have any questions or comments, please do let me know below. 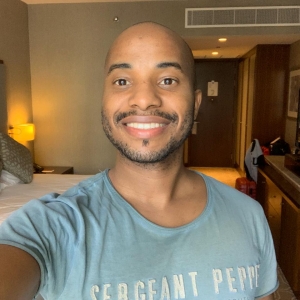 @peepso_user_7(Eric Tracz)
@peepso_user_20903(Ongun) trust me, we'd love to release it asap. We had an internal deadline of end of March. Unfortunately, due to unforseen events, deadline had to be pushed. Just today, we hired a new frontend developer to join our team, he starts Monday. Just to be clear, as an addition to the team so we can avoid this in the future. @peepso_user_8(Matthew) is already working overtime. Including weekends, every weekend for the past month as well. He's working this weekend to to get it done as fast as possible. Not to mentioned cancelled holidays.

Having that said, I won't allow releasing anything less than a great product. It needs to be tested as well. I believe that you'd be rather disappointed if we released a half-baked-beta and pretend that's supposed to be it.