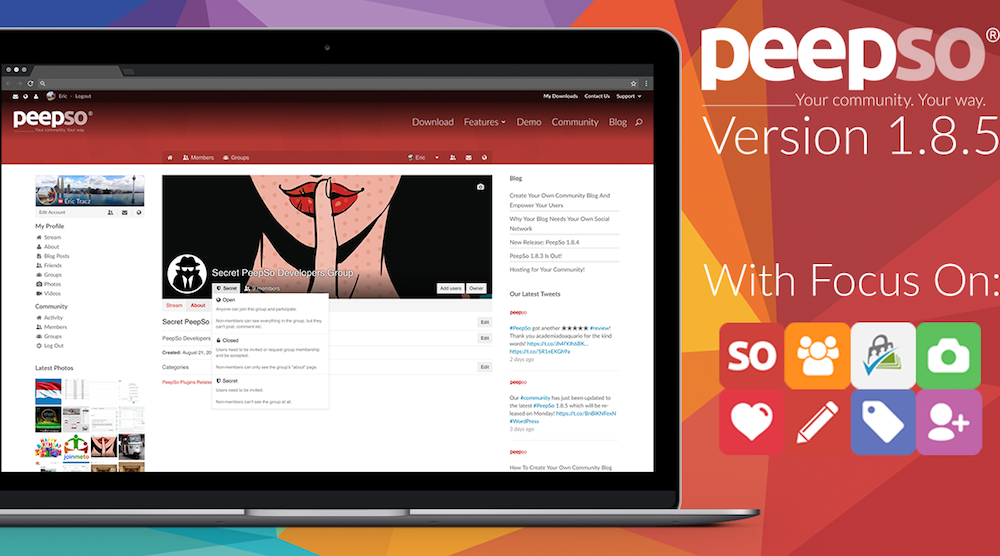 I’m proud to let you all know about the immediate availability of PeepSo 1.8.5. This is yet another release packed with amazing features. We’ve put focus on Groups, PMP Integration and Core plugins. New features and improvements have also been added to others, grab a cup of coffee and let’s get to it, shall we?

Let’s start with this. Simply go to the backend of your site > Dashboard > Updates, select all PeepSo plugins that need to be updated and click ‘Update Plugins’. Once that’s done, refresh the page and make sure to update PeepSo Core plugin as well. When that’s finished go to: Plugins list and just double check that all plugins are active. If not, simply select and activate the plugins. The whole operation doesn’t take more than 3 minutes. Should you have any issues or questions, please do contact us.

Starting from this release, every single notification can be manually marked as read without actually having to visit the link. Just click on the mark as read icon and that’ll set that particular notification as read.

In previous PeepSo versions when something was posted there were only relative dates shown. As in: 1 minute ago, 1 day ago… and so on. We’ve added a setting in the config. Admin can now decide whether he wants to use the relative dates, absolute ones (August 21st, 2017) or a mix. Meaning show absolute dates after 24h. You can find this setting in PeepSo Configuration > Appearance.

This is mostly under-the-hood improvement, but it has 3 important points. Firstly, it unifies the navigation throughout PeepSo which gives better UX / UI. Secondly, that makes development easier and faster for both us and 3rd party developers, third and probably most important it has positive impact on the loading speed of your community. Thanks to this you’ll also see Classifieds menu item in the community section in PeepSo profile widget.

Oh yes, Secret Groups have finally come to PeepSo. Your Community can create secret groups. Which pretty much means that nobody can see those groups on any listings unless they’re the group members. And to be a member you either need to be invited or added by the admin. The secret group posts are only shown to the group members.

In previous version we’ve introduced group SEO friendly URLs. They are generated by default based on the group’s name. Now it’s also possible for group owners and community admins to change the group slug to their liking. There is also fallback ensuring that group names are always valid and there won’t be conflicts. That’s one of the reasons why custom numeric group slugs are not allowed.

Paid memberships are one of great ways to monetize Your Community. With this release PMP integration plugin got the possibility to automatically assign users to certain groups based on what membership level they pick when registering.

To accomplish that obviously you need the PMP integration and Groups plugins. Create the groups you want to have. Then go to PMP membership levels and edit or create a level. When you scroll down you’ll see the list of groups. Select the checkboxes next to groups you want users to be added automatically to upon registration and that’s it.

With the release of Secret groups, the migration tool has also been updated to support migrating secret groups over from BuddyPress to PeepSo. With that also covered we’re proud to say we’ve got a 100% coverage of moving BuddyPress communities over to PeepSo not counting 3rd party extensions.

We’ve redone and improved how CSS is handled and loaded for both Reactions and BlogPosts plugin. Thanks to those improvements the load speed of those plugins has been significantly increased.

For the past few weeks we’ve had a few things pointed out to us when it comes to accessibility issues. Especially the screen readers, so we’ve made improvements to the Reactions plugin in this release. We’ve also started planning and work on other plugins that need to be improved so that they can be used with ease by those who rely on screen readers.

Some of the bugfixes that are worth mentioning are: issues with time zones and incorrect timestamp on posts and in chat. Email notification content for being tagged in a comment or post. Wrong notification URL for groups when SEF links were enabled. You can see the entire changelog here.

PeepSo Core is Great! Get the Foundation Plugins for FREE! Add that social spark to your website! Try it today!
Get PeepSo Today!

Get PeepSo – Advanced Ads Integration and all its supporting plugins! PeepSo Foundation, Extended Profiles, Groups, VIP, Friends.
Get The Plugins

@peepso_user_8266(Chiji Ananaba)
Hi, Newbie here. I just installed peepso core plugin on my site and it looks good.I however keep getting this message "It looks like PeepSo emails were not processing properly. We just tried to fix it automatically" I have tried deactivating and reactivating a couple of times but it still comes back. Any tips on how to fix this?

@peepso_user_7(Eric Tracz)
@peepso_user_8266(Chiji) hi there, please open a support ticket: https://PeepSo.com/contact our devs will inspect it.
PeepSo - Social Networking for WordPress
PeepSo.com
PeepSo - The Next Generation Social network Plugin for WordPress Quickly and effortlessly add a social network or an online community, similar to Facebook right inside your WordPress site.
August 24, 2017 12:48 am August 24, 2017 12:48 am
1 person likes this