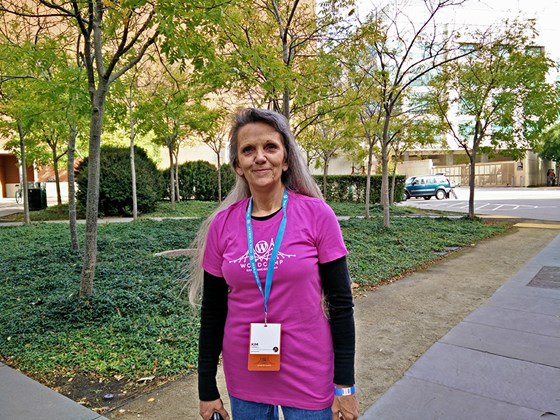 While compiling our Women of WordPress list, we came across many touching tributes to Kim Parsell – a woman whose influence on the WordPress community was so significant that a memorial scholarship was established in her name by the WordPress Foundation after her untimely death earlier this year. This is what we found out about the woman affectionately known as #wpmom, whose legacy continues to pave the way for and inspire other women working with WordPress.

Kim’s contributions to the WordPress platform are some of the most diverse and significant we’ve encountered during this project. She was an important member of the WordPress documentation team; she contributed to five consecutive WordPress releases, and was incredibly proud to have been acknowledged in Matt Mullenweg’s State of the Word address in 2014. This video of Kim speaking at WordCamp San Francisco 2014 is a great place to start if you want to understand the breadth and complexity of her practical contributions to the platform.

Beyond that, she was an incredible cheerleader for others working in WordPress; there are countless blog posts sharing how she’d encourage over-worked developers to take a break and have some lunch, built much-valued friendships over Twitter and email, drove for hours just to go to WordPress meetups and help others with their projects, offered no-nonsense advice and hugs in equal measure; essentially, she did everything possible to help turn a group of developers into a caring, bonded community. She had a special interest in encouraging older women to get involved in WordPress.

I think Kim Parsell’s legacy stands as the very best example of what it means to be influential in the WordPress community. She not only made her own, significant contributions to the platform; she made others believe they could, too – and offered practical help wherever she could.

Kim was able to attend her very first WordCamp thanks to assistance from the WordPress Foundation, so it’s fitting that her memorial is a WordPress Foundation scholarship enabling other women to have the same experience (with older women being highly encouraged to apply).

Thanks to all those who have remembered Kim, and of course to Kim herself, for showing us what a Woman of WordPress should aspire to be.