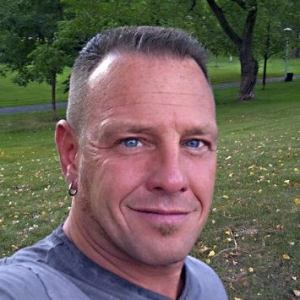 Dan Stringer
6Friends 22Followers
Stream About Followers Friends Groups Photos Audio & Video
Gender
Male
Birthdate
May 8, 1965
About Me
Dan Stringer is a proud Montrealer who felt in love with the electronic underground music scene more than 25 years ago who decided over the years to get involved as a promoter, a DJ, a producer, a radio host and finally a record label owner. During the past three decades, Dan carved his career with only one goal in mind; “keeping the underground scene, culture, and sound, ALIVE”! That’s what he did while collaborating to many events playing alongside some of the most creative artists of the underground culture. His passionate approach has allowed him to carve out a unique dirty, sexual, crazy and energetic signature that was elaborated by picking wisely, set after set, some serious fat dirty high-octane techno-induced beats. Ultimately this unique sound texture has brought him to play at mostly all the venues and illegal rave parties and afterparties in Canada at which he consumed an extremely huge amount of Red Bull allowing him to inspire thousands of people to dance to his beats. Back in studio, he's currently working on many projects mainly with his son Danyck but also with his great friend and partner in crime Ulrich Van Bell who is also the owner of B2P Records, Vortek Records and 5HTP Records. Dan and is son Danyck, are also the owner of House of Sins Productions a dj collective founded in 2003 by Dan and dj Indica his mentor and former partner. HOS was initially created to produce and present to the Montrealer’s, the first North American Wet & Hard event introducing Berlin's sensation of the moment, Corvin Dalek (www.corvin-dalek.com) the creator of this Wet & Hard movement, that was in early 2000 a new underground electronic music style in Europe. Over the years Dan has produced numerous successful events through HOS, namely; Wet & Hard I, II & III; Wild Nights I & II; Ménage à Trois; Le Bal en Noir I & II; Le Bal de l'Horreur to only name a few. Always hungry for more challenges, Dan collaborated with promoters and venues to many creative projects related to the underground music culture. Additionally, over the years he has been hosting different underground music radio and web-radio shows. He was also was invited many time to produce special mixsets for different podcast series and web-radio shows for Proton, Frisky, Techno.FM, SinCity.FM, House Pacific, MUD Radio, DNA Radio and many more. Recently, since 2015, Dan has the immense pride and joy to team up with his son Danyck to share their common passion with techno music lovers from everywhere via their dj duo named "Father & Son". Father & Son... it's a father and his son share a common passion which is... Banging Techno music like a cheap door in the wind just for fun! In 2018, House of Sins Records was born. Dan gave birth that old dream of his that he had from the early beginning of his career. All this became possible with the collaboration of his son and the precious expertise of Ulrich Van Bell, his partner in crime. When sunked into a techno ambiance, the organism is forced to adapt itself to it's rhythm and frequencies while at the same moment they are modifying the brain own frequencies causing extended pleasure and extacy. Techno Music is a true therapy. Without Techno, Life Would Be a Mistake.
What best describes you?
Web DesignerCommunity AdminBusiness OwnerOther
Website
www.xeptions.com
About My Community
Are you fed-up and tired of your day to day social media abusive censorship? YES? Then come and join our adult only open-minded censorship free community filled with amazing people Just Like You!
Where are you from?
Canada